NB EMBARGOED TILL 6AM FRIDAY 25 SEPTEMBER

TO: ALL NEWS REPORTERS, COS, EDITORS

The sites were all deregistered following applications by developers to ‘disturb’ them under s 18 of the Aboriginal Heritage Act (AHA). Minister Collier later granted s 18 ministerial consents for 37 sacred sites to be ‘disturbed’. The WA Supreme Court’s Justice Chaney ruled in a landmark Port Hedland test case on April 1 that the narrow definition of ‘sacred site’ used by the ACMC to deregister one of the 37 sites was invalid, and referred the site back to the ACMC for reassessment.[2]

Minister Collier later tabled in State Parliament the names of 36 sacred sites which had been unlawfully deregistered using the same flawed and narrow State Solicitor’s Office interpretation of ‘sacred site’ under s 5b of the AHA which was overturned by Justice Chaney.[3] 34 out of 36 of these sites were said to be the subject of actual or proposed development.[4] He also stated on 15 September that 11 previously registered sites had been removed from the DAA site register since the Chaney ruling on 1 April this year.

Given these circumstances, and DAA’s lack of response to Chaney’s Robinson v ACMC since April, AHAA today announced it was ‘doing what DAA should have done five months ago, and is writing to Aboriginal custodians of all the deregistered sites’, urging them to demand the immediate reinstatement of all 36 sacred sites to the DAA site register.

Yamatji man and AHAA spokesperson Clayton Lewis, a senior custodian of one of the 37 deregistered sacred sites, said today: ‘It’s ironic that Justice Chaney delivered his decision on April Fool’s Day, because DAA’s response since then has been a bit like a bad April Fool’s Day joke’.

‘Nearly six months on, I haven’t received any correspondence from DAA admitting they unlawfully deregistered the important Monger’s Lake Waterway sacred site in our country in the Mid-west, or telling us what they propose to do about it. We’re not aware DAA has contacted a single custodian for any of the other 36 sacred sites, or published a revised version of the DAA Guidelines which Justice Chaney said were legally invalid’.

‘We also don’t know whether Peter Collier has withdrawn any of the legally invalid s 18 ministerial consents he issued to developers, or whether the companies have already gone ahead and destroyed the sites’.

AHAA is currently seeking legal advice as to whether Aboriginal custodians of these sites could sue the Minister, the ACMC or the State Government if any of the sites have been damaged. The Aboriginal heritage advocacy group is today also releasing the attached map showing the location of the deregistered sacred sites, as well as a further 83 ceremonial and/or mythological sites deregistered under the Barnett Government since 2008 which have been identified by University of Western Australia Archaeology Department researchers Dr Joe Dortch and Dr Tom Sapienza.[5] The Minister has also stated in Parliament that a further 16 (so far unidentified) sacred sites failed DAA registration solely on the basis of the SSO’s flawed s 5b sacred site definition.[6]

‘Given these sacred sites were wrongly deregistered by DAA in the first place, why hasn’t it just put them back on the register?’ asks Lewis. ‘The Minister and his DAA Executives recently made a big song and dance in Parliament saying that all 37 sites now need to go through a complicated reassessment process which might take DAA months and months.[7] This seems pretty strange, given that under its current Chair, the ACMC has been able to assess dozens of sites literally before lunch time, many of them unfavourably.[8] As far as we know, DAA still hasn’t reassessed a single one of the 37 deregistered sacred sites. We also can’t understand why the Minister thinks Justice Chaney’s decision needs to be referred back to the State Solicitor’s Office for further advice, when it was the SSO which caused the problem in the first place by providing its ridiculous definition of a sacred site’.

Clayton Lewis’s 3 August letter to the Minister requesting immediate reinstatement of the Monger’s Lake Waterway sacred site, of which he is a senior custodian, has received no response to date. See: https://www.facebook.com/aboriginalheritagewa/photos/pcb.1494900327487865/1494900090821222/?type=1&theater. 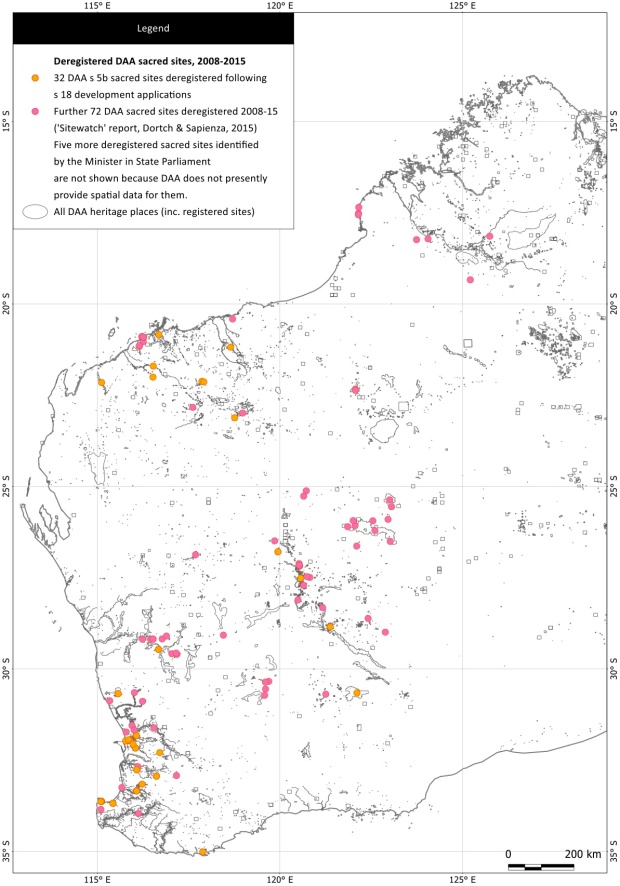 The location of the deregistered sacred sites, as well as a further 83 ceremonial and/or mythological sites deregistered under the Barnett Government since 2008 which have been identified by University of Western Australia Archaeology Department researchers Dr Joe Dortch and Dr Tom Sapienza.

For expert commentary on the DAA site deregistration issue:

Organisations signed on to Open Letter